Perlman, most recently known for starring in the television series "Sons of Anarchy," toured the Dewitt facilities Monday that will become home to his production company, called Wing and a Prayer Pictures.

"My intention is to make as much of my movies here as humanly possible. There’s going to be maybe a movie that takes place in Iceland, to the extent that I can, shoot all of that in Syracuse. There are movies that take place in other places that I’ve managed to adapt to Syracuse,” said Perlman 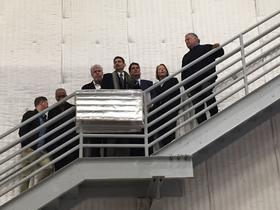 And the facilities that are still under construction, are a step ahead of anything available now in Hollywood or New York, according to designer Britt Penrod of Giant Entertainment and Management.

"Most of the stages wouldn’t compare to this at all,” said Penrod. “Most of them were designed or constructed as many as 100 years ago. I think the most recent stage construction was 17 years ago in Manhattan Beach.”

Some of the bells and whistles at this studio include a catwalk system that eliminates the needs for certain lifts; a wood floor that allows sets to be built quickly; and a silent air conditioning system.

Perlman has committed to making at least five films upstate, including during post-production work. He says while the state’s new film and business tax breaks helped make this area attractive for his bottom line, he also likes the idea of helping bring jobs to a part of the world that’s lost so many in recent decades. 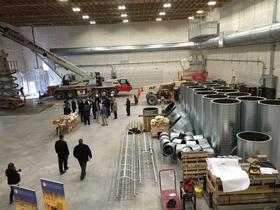 “Everywhere I’ve ever gone to make a movie everybody does better. Hotels do better, restaurants do better, dry cleaners do better. Because all these people come in are working and spending money in to the community,” said Perlman.

Wing and a Prayer joins the Filmhouse as production companies that will be making movies at the Dewitt facility. These companies are eligible for state tax breaks including Start-Up NY, because the facility is associated with the SUNY Polytechnic Institute.