Summers along the Great Lakes include fishing, boating -- and dangerous algae blooms that can shut down beaches. These blooms are caused by excess phosphorous, a lot of which comes from farms. Now some of the region's farmers are testing agricultural practices that could reduce harmful runoff. 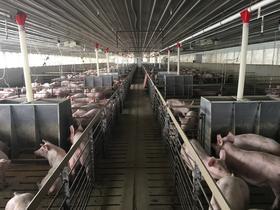 Duane Stateler and his son Anthony run Stateler Family Farms, one of a handful of demonstrations farms across the country. Over the next five years, three farms in Northwest Ohio will test different practices to find out what reduces phosphorus runoff.

The Statelers are unique from the other two project farms because they care for more than 7,000 hogs from birth until they’re ready for market, as well as planting crops.

Underneath each of Stateler’s three barns is a manure pit, which he uses to fertilize 500 acres of corn, soybeans, and wheat. Stateler will use that fertilizer to implement one conservation practice at his farm -- it’s called variable rate technology. That’s when crop land is split up into two and a half acre plots and each is prescribed fertilizer based on the soil in the plot.

Researchers are also using Stateler’s land to examine practices that have been criticized in the past, such as testing soil that’s been cultivated year after year. Stateler says no one has proven it harms the environment.

“All of the sudden everyone says we just can’t do this anymore, but we’ve never had the opportunity to test to see whether we do get runoff from it,” said Duane Stateler.

At the project announcement, Anthony Stateler outlined why they wanted to be a demonstration farm: “It’s our duty here to be able to be good stewards of the environment.”

Aaron Heilers, who will manage the farms during the five-year commitment, said the program’s results will be shared throughout the state and the country.

This is the nation's second group of demonstration farms. The first started in Green Bay, Wisconsin in 2013.

Footing the bill for the project is the Natural Resource Conservation Service, which has pledged $77 million to farmers in Ohio, Michigan and Indiana for the next three years to fund best management practices.  The federal agency says phosphorus runoff will decline if each farmer adopts one or two more conservation practices.

But Duane Stateler says it’s not easy to be a farmer in the Great Lakes watershed. “It’s a scary thing and it’s a conversation of farmers – why is everyone pointing the finger at us? Why am I wearing this big target? “

Almost 400 miles to the northeast, New York farmers are dealing with another culprit of nutrient runoff: soil erosion.

South of Lake Ontario, tributaries like the Genesee River can wash away hundreds of acres of farmland every year. When this soil washes into the river, it carries with it all the chemicals used to farm it over the years.

George Thomas, executive director for the Center for Environmental Initiatives, has been studying streambank erosion and working with farmers to reduce it.

“The farmers were very interested in doing something," he said. "It turns out that they're interested because they're losing their property.”

To stop the erosion, Thomas works with farmers to cut into their steep stream banks on an angle, creating a slope. Then they cover the slope with rocks and shrubs, which prevents the surface from eroding under normal high and low flow conditions.

This method is not 100 percent effective over the long term. Climate change is causing more abnormal weather events, with higher highs and lower lows. There is also some debate over pouring all these resources into rehabilitating farm lands.

“Here, in the Genesee, these other issues in terms of point sources like wastewater treatment plants still exist,” he said.

But addressing agricultural practices might have a bigger overall impact. Lake Erie and Lake Ontario are surrounded by farmland. Other Great Lakes watersheds, including Saginaw Bay in Michigan and Green Bay in Wisconsin, also are looking at agriculture as a major source of phosphorous runoff.