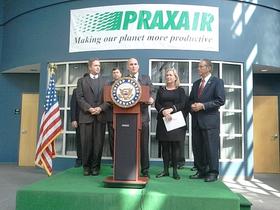 Colleges across the country may soon compete to be designated as “Manufacturing Universities.”

A bipartisan bill being put forth by Senator Kirsten Gillibrand, and Congressmen Brian Higgins and Chris Collins, aims to provide funding to 25 schools with the best plans for meeting the growing demands of modern manufacturing.

Collins – who holds a mechanical engineering degree and comes from a manufacturing background – called the bill common sense legislation. He said engineering creates well-paid jobs across the board.

If the bill is passed, schools would have the opportunity to submit plans on how to better incorporate manufacturing and engineering into their curriculum. The plans must also include working with local firms to create jobs and expanded training opportunities for students.

Kemper Lewis, Chair of the Mechanical and Aerospace Engineering Department at the University at Buffalo, said the school’s expertise in advanced manufacturing gives it a good shot at becoming one of the 25.

“This Manufacturing Universities Act is going to require a very tight partnership between academics and industry," Lewis said. "So that’s where I think we’re well positioned as well. We’ve got a lot of medium to large-scale manufacturers in the region that are ready to be positioned in this partnership with us.”

Each of the 25 schools chosen would receive $20 million over four years to meet the program’s goals.