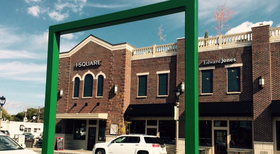 The owners of a local business project are planning to sue the Republican Party chairman over comments he made this past weekend.

Mike and Wendy Nolan own I-Square in Irondequoit, which is a mixed-use development.

Republican chairman Bill Reilich called I-Square a “failure,” and said it was defaulting on its tax agreement with COMIDA, the county’s industrial development agency.

COMIDA tells WXXI that I-Square is meeting its hiring targets, but is behind on the construction of a new building.

”This has been escalated to a degree that is extremely harmful to the future of I-Square, by COMIDA’s actions, their statements as well as Mr. Reilich’s. It’s definitely escalated to a point that it will end up in the courts over these claims.”

Nolan said he would "absolutely" file a libel suit or defamation claim.

Reilich has not been available for interview, but he released a statement saying he believes the project can succeed. He says he's disappointed that Town Supervisor Adam Bello, a Democrat, is "abandoning" the project.

Bello has been appointed to take the office of the Monroe County Clerk.

See Statements from the various parties involved in this story below: