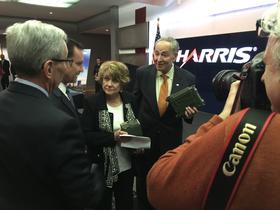 Rochester's Harris Radio Corporation is one of three companies recently awarded a big US Army contract. Over the next ten years, Harris will produce tens of thousands radios for soldiers to use in combat. The contract is worth $12.7 billion.

But Senator Schumer says it almost didn't happen. He says the Department of Defense had a closed procurement system for the contract that gave one company an advantage, and would have prevented Harris from bidding.

"The way DOD had set up the system, the company with the better, more cost-effective system wouldn't even have a chance to show it's stuff. It was just unfair."

He says he and Congresswoman Slaughter intervened to level the playing field for companies like Harris.

Congresswoman Slaughter says, as an elected official, there's nothing more serious than sending people off to war.

"And the very least that we owe to them and their families is the kind of equipment that works and is the best and that they feel secure in."

Schumer and Slaughter say the Harris contract will not only benefit the soldiers using the radios, it also benefits tax payers, and it ends up benefiting Rochester since Harris is now projected to grow and add jobs in the region.