Young people today are a giving generation, according to a recent poll that shows that  75 percent of millennials donated to causes in the calendar year. 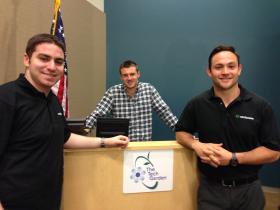 But the tried and true charitable strategies of galas and golf tournaments often don't cross the generational divide. With this in mind, one Syracuse start-up is hoping to offer charities a chance to reach younger givers using something they relate to: social media.

David Bulger a board member of the Central New York Chapter of the Juvenile Diabetes Foundation, said his board, similar to many,  is comprised of members closer to 50-years-old than 25.

"You sit around the board meeting thinking of ways to fundraise, and it's the same ideas that come up,” Bulger said. “Oh, let's do a golf tournament. Because 20-somethings love to play golf. Right? I'm kidding. Sorry, being facetious. But we don't know how to connect."

They have at least one new 20-something donor now, however, Syracuse University student Zack Glascock. Every time Glascock posts something on Facebook, five cents goes to the Juvenile Diabetes Foundation.  When he tweets something, the charity gets a penny.

He believes it's turned wasted social media time into something more.

"I think there's a lot of meaningless content out there, and by linking your interactions to a more meaningful purpose, it gives it more meaning," Glascock said.

This connection for Glascock, and over 200 other users, has come through Centscere, A Syracuse University based start-up that's the brainchild of Syracuse graduate student Ian Dickerson.

Dickerson and his partners, Frank Taylor and Michael Smith, are all 23 and Syracuse students.  Ninety-five cents of every dollar they collect goes to charity.

Millennials, like them, are the main target, Smith said.

From the charity point of view, Bulger said that, even though the donation numbers aren't huge so far, it's worth it because it's easy money, so to speak, as opposed to something like a gala, which the foundation puts on every year.

"That costs a lot of time, talent and treasure just to get it up and pull it off,” Bulger said. “Now, we raised a lot of money that way.  But a lot of time and effort went into that.  And so with Centscere, you get a relatively huge bang for the effort buck."

Right now there are dozens of charities on board, ranging from Habitat for Humanity to the Syracuse Chapters of the Alzheimer's Association.  But the founders are looking for more, and admit getting the big national charities on board has proved to be a challenge.

"It's not hard to convince them,” Smith said.  "It's hard to get a follow through from the decision makers. So typical meeting will be ‘Hi, nice to meet you,’ and we'll give a pitch.  They're interested, then it's walking up the chain. ‘I have to check my boss' boss', boss', boss' boss.’ So sometimes the red tape is very frustrating."

Dickerson says they will continue to plug away, with a goal of getting 50 thousand users this year, which he says  would provide $4.2 million to charity.

That's a lot of loose change charities could tap into if they embrace the social media giving connection, Dickerson said.

"Social media is not going away, it is an everyday behavior,” Dickerson said. “And those that can adapt to it, and innovate using it, will succeed. But those that can't are going to lose out on the younger generations."

Bulger's charity hopes this is the beginning of a beautiful relationship between the charity and millennials.

“We have a big walk every year, there's a bike race, there's all sorts of things that we do to raise money, but we don't know how to get the younger giver to get involved,” Bulger said. “And Centscere creates a really good bridge for doing that."