The secretary of defense says Syracuse University’s veterans and military families program is doing "path-breaking" work not being replicated anywhere in the country.

A visit to Syracuse University and its Institute for Veterans and Military Families was the final stop on Secretary Carter’s first domestic trip since taking over the Defense Department in February. He visited Fort Drum on Monday, where he said the base isn't going anywhere.

He spoke to a crowd of Syracuse University students and young military members and answered a few questions from them. That was preceded by a private discussion with IVMF and university officials.

"It’s certainly the best that we’ve been able to think of," Carter said. "We worked really hard at it, we’re very committed to it." 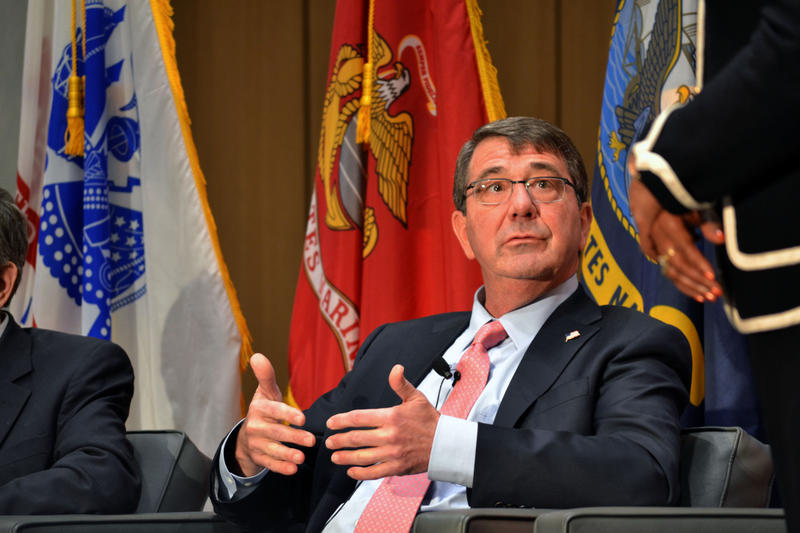 Carter says it’s best for armed service members to start thinking about their future while they’re still in the military. "This transition is not a phenomenon for the end of service, it’s for the entire duration of service and for thereafter, where we have continuing responsibilities and continuing opportunities," said Carter.

The defense secretary concedes the military has to change its pitch in order to still be appealing to recruits.

"If we’re going to have a new generation ... we can’t offer them a conveyor belt that you get on and you don’t move to until you get off. We’re not going to be appealing if we do that," he said.

Mike Haynie runs the IVMF. He says they’re always rethinking their supportive services for transitioning because of changes in the military itself. "They have to be aligned with the demographic of those transitioning and also the aspirations and post-service goals those folks have," he said.

The institute recently launched a program along with the Defense Department called Onward to Opportunity. Haynie says he hopes that program will compliment other efforts from the government.

In those other stops, he outlined interest in offering retirement plans to military members who don't serve long enough to earn a pension and allow for longer leave times for school or family needs. He also promoted an easement of enlistment requirements for certain fields of the military.