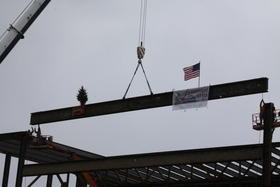 The del Lago Resort & Casino had a “topping out” ceremony today, where the last steel beam was placed on the 40,000-square-foot entertainment complex. The ceremony represented that the Tyre, Seneca County, resort was nearly halfway complete and is eyeing its planned February opening.

“Del Lago is really starting to take shape,” said Jeff Babinski, del Lago executive vice president and general manager. “Within a week, the casino will have a weather-tight roof, allowing more intensive work to begin there, even as other workers continue to pour concrete for the foundations of the hotel and spa, which are now about half completed.”

“We’re witnessing the start of many great things to come,” stated Ron McGreevy, town of Tyre supervisor. “I’ve said it before, and I will say it again, the future is indeed bright for Tyre, Seneca County, and the entire Finger Lakes region. The del Lago Resort and Casino project has definitely provided the spark.” 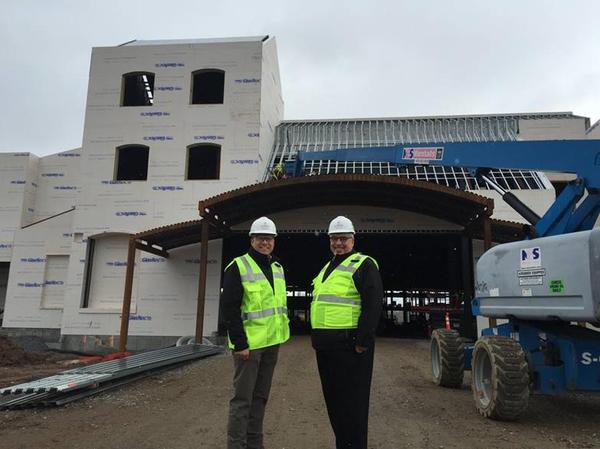 The $440 million project will boast a 205-room hotel, spa, and casino, along with a banquet facility, several restaurants, lounges, and an entertainment center that will seat 2,500.

Project officials noted the economic impact of the project is being felt in the region, even before the doors (that are not installed yet) are opened, with nearly 200 workers helping to build the complex according to Finger Lakes Building & Construction Trades Council President Mike Davis.

“Two hundred construction workers who earn approximately $50 an hour in wages and benefits, working eight hours a day, six days a week, means $480,000 being earned on this site, dispersed into our area’s economy,” Davis noted. “Let that sink in for a minute…half-a-million dollars a week towards mortgages, cars, food, and clothing. That’s what makes an area prosper.”

Del Lago officials expect the resort to create 1,800 permanent jobs when it opens.