A temporary ban on the controversial gas extraction method hydrofracking has dragged on for years. Even as the governor says a long-awaited study is nearing completion, a large group of local officials want the ban to continue. 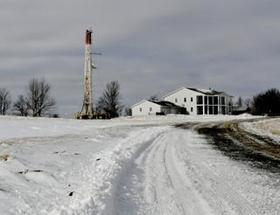 They sent a letter to Cuomo this week as the governor says a long-awaited and severely delayed health impact study will be completed in the next few weeks. They want an additional three to five-year moratorium on the drilling method to conduct more studies.

Huntsman says there are still many issues that have not been studied, like the effect of the drilling on agriculture and air pollution.

Greg Young is Gloversville town supervisor. He says the state should continue the drilling ban and, instead, continue to invest in solar and renewable energy.

"So that we can look comprehensively at our energy needs as well as job and economic development needs. Help plug the brain drain and create good, lasting jobs," he said.

Cuomo has repeatedly said he will let the science decide whether fracking will be allowed in New York.

Drilling has brought jobs and economic windfalls to states like Pennsylvania, which have allowed the method. But there have been questions over how to deal with its environmental impacts, like contaminated wastewater.