Beginning Friday and continuing for the next two months, a handful of local retailers will set up shop inside a storefront inside Buffalo's Pierce Building on Main Street. They're the participants in the second Queen City Pop-Up.

The participating retailers include fashion, art, and even a backpacking shop. The Pop-Up, this time taking place at 653 Main Street in Buffalo's theater district, is again seeking to encourage small business sales downtown.

Brandye Merriweather, with the Buffalo Urban Development Corporation, says the agency found its five participants following a request for proposals and a selection process. 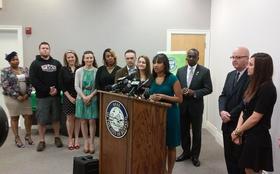 "A couple of the things that we look for are vendors who have unique merchandise. We really want Queen City Pop-Up to be something special that you can't find in other areas," Merriweather said Thursday.

"I've been working the art festivals and local craft markets and saw the request for proposals and thought, why not?," said Gina Quadrone, who owns the shop Ginametrical Designs, one of the participating businesses.

City officials are hoping to create a success story, as what happened with one of the shops in the inaugural Queen City Pop-Up late last year during the holiday season. Eric Dacey and his wife Andrea are growing their shop Buffalo Adore.

"We are very pleased to say that because of the success of the Pop-Up, we will be opening our second location in downtown Buffalo in the Market Arcade building this summer," Dacey said to applause.