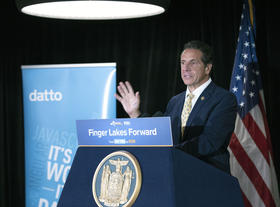 Gov. Andrew Cuomo made a stop in Rochester on Wednesday to help celebrate the expansion of Datto.  That’s a data protection company started by Austin McChord, an RIT grad who last year announced a $50 million donation to his alma mater.

Cuomo notes that Datto has moved its 225 jobs from its previous location on Franklin Street in Rochester, to several floors in The Metropolitan, which is the former Chase Tower.

Cuomo also announced that the state is creating a new venture capital fund to help attract other entrepreneurs.

“The state is going to provide another $25 million for a venture fund, managed by Excell, so they have capital that they can offer an “Austin” who wants to start a new business.”

The Finger Lakes Forward Venture Capital Fund will be managed by Excell Technology Ventures, an offshoot of Excell Partners.  To be eligible for an investment from the fund, a company will be required to be located in the nine-county Finger Lakes region and either maintain its headquarters in the area, or ensure that at least 75 percent of its employees are working in the region for a period of no less than three years after the initial investment. 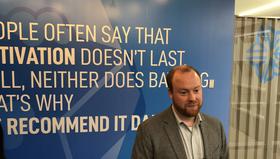 Datto CEO Austin McChord says the location in the center city is a great spot for his growing business, particularly because it’s the kind of location his workforce favors.

“I think a lot of our employees want to live in an urban environment and somewhere that they can walk to work; in this building, some of our employees commute to work via elevator, they literally live in the floors above.”

McChord says Rochester is an excellent location for a company like his. 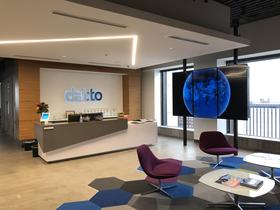 “Incredible access to technical talent; hands down, there’s more great technical talent here than I think anybody realizes and we open jobs and we find world class people and they stick around, they’re excited to come to work, we do everything we can to take care of them," McChord said.

New York State provided a $2.1 million grant and other tax incentives to help with the expansion of Datto in Rochester.

Officials say Datto now has 80 positions open; eventually they hope to grow to more than 350. The company’s headquarters is in Connecticut.