For more than a decade, undocumented Hispanic workers have been indispensable on dairy farms across Upstate New York. The immigrants live largely invisible lives and rarely stray off the farm to avoid detection by federal agents. They are also less likely to report abuses.

For the first time in the North Country, farm workers and their advocates stepped out of the shadows and held a public protest. Recently, they marched to the gates of the region’s largest dairy farm, Marks Farms, near Lowville, N.Y., to call attention to what they called widespread wage theft, harassment, and other forms of abuse.

About 40 people chanted “Milk cows, not workers,” and other slogans as they marched up a gravel road past long rows of cow barns. They waved signs that read “No Blood in Milk” and “Say No to Workplace Violence.” The protestors said some farmers treat their cows better than the humans who milk them.

"Workers should be treated with dignity," said Lázaro Álvarez, who is originally from Mexico City. Álvarez used to work here on Mark’s Farm, one of the state’s largest dairy farms. According to farm officials, about 40 of its 55 employees are Hispanic.

The Worker Justice Center of New York and the Workers' Center of Central New York targeted Marks Farms for this march because of an incident under investigation by state police. A farm manager, Michael Tabolt, allegedly beat a worker named Francisco and threw him to the ground several times after Francisco was reluctant to work on his day off. Advocates said there were witnesses, but they were scared to testify. Francisco was fired.

Marks Farms spokeswoman Lindsay Peck would not comment on specifics because of the investigation, but she said the farm supports Tabolt’s actions and said Francisco violated an employee policy.

"We support the workers' cause, in that we want our workers to be well taken care of," said Peck. She said the farm pays a competitive wage, offers good housing, and provides soccer fields for the workers to play on during their free time.

“To our fellow workers working on this farm,” José Cañas shouted into a megaphone, as the marchers lined up facing Marks Farm’s front door. Facing back at them, two farm representatives leaned against a car. Curious cows peered out from the barn. “Report the beatings! Report the injustices, the abuses, the racism,” shouted Cañas.

Advocates said it is not the first time workers have complained about Marks Farms. Rebecca Fuentes of the Workers' Center of Central New York said on many farms, abuse of workers is common; things like poor and unsafe housing, ignoring health problems, physical and verbal abuse, failure to pay minimum wage and wage theft. 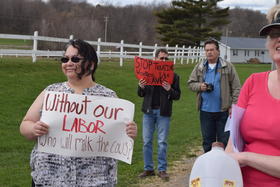 It is estimated several thousand undocumented immigrants work on New York and Vermont dairy farms. They present false Social Security cards that farmers do not have to verify. Federal agents generally look the other way, but this legal limbo leaves workers vulnerable to abuse.

Steve Ammerman, spokesman for the New York Farm Bureau, which lobbies on behalf of New York’s 5,000 dairy farms, agreed the lack of immigration reform "does pose challenges both for the farmers and the farm employees." He said workers should report any kind of substandard work condition, but he said farmers bristle at the suggestion that abuses are common.

"The overwhelming majority of the dairy farms take good care of their employees because they have to. They need them. Their farms wouldn’t exist without them. And they could lose a worker to another farm down the road if they weren’t doing what’s right," said Ammerman.

Some workers do walk away to farms with better conditions, but Rebecca Fuentes said that is not so easy for immigrants who do not know English or the region and fear deportation.

"When you are not from this country, you don’t have many options," Fuentes said.

Most of the marchers were advocates from Syracuse or Rochester, and only a handful were farm workers. Kathy Tucker, a union activist from Gouverneur, was one of just a couple North Country people at the march. She said after hearing the farmworkers’ stories, she believes abuses are more widespread than people want to believe.

"Unfortunately, I believe this is the norm. That really is very, very disturbing to me," Tucker said.

The marchers delivered a protest letter to Marks Farms’ office and called for the supervisor under investigation to be let go. Álvarez said it is true not all farms are the same. He said he found better conditions on a farm in the Mohawk Valley. Alvarez said Hispanic labor is a critical part of the upstate economy. Dairy farms need them to milk the cows. He said the workers just want to be treated with dignity, equality, and respect.