Starting as early as the end of the summer, all officers in the City of Ithaca Police Department are going to wear body cameras. City of Ithaca Police Chief John Barber presented the department’s camera policy to common council members earlier this month. The policy includes rules for operating the cameras, storing the videos and releasing them to the public.

Jennifer Forbes works at the Southside Community Center, in a mostly African-American neighborhood in Ithaca. She says the cameras are a good idea if they lead to transparency.

“However, I also feel like there’s a drawback because it is still the property of the police department and I feel like the community, they still won’t trust it,” says Forbes.

Here are the details: The police department will keep the recordings. Every call an officer goes on, beginning when the call is received in the patrol car, will be recorded. The camera is supposed to stay on throughout any law enforcement-related encounter. All footage will be saved at least six months or until a related citizen complaint has been resolved. Officers won’t be able to alter the videos. The department will share the footage with the city’s police oversight board and will consider requests from the public under the freedom of information law. 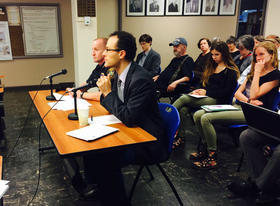 Barber says his department is adopting the cameras, in part, to work on that trust issue.

“In the end, we’re all in this together, we are one community. So we need to just continue down that road,” says Barber.

The department recently held a citizen’s police academy and is planning an open house at the station. The city is also working on opening a new station on the west side of town.

Forbes says police have a more pressing challenge than how to store all the footage they’re about to start collecting.

“I feel like there’s just a real uncomfortable space when it comes to police officers engaging in just basic conversation with community members,” says Forbes.

She added that too often residents in this part of town feel like the police only come around to make arrests.