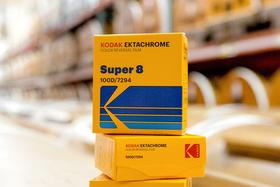 Eastman Kodak and Kodak Alaris (the company that was spun off from Kodak some years ago) have announced the availability of the Kodak Ektachrome Film line.

That’s a film that had been around for years, and among other things was used to make color film slides.

With the shift to digital, the film has been out of production for several years, but the company had announced in early 2017 it was bringing it back, and this week it began to be available for shipping. The film is being produced at the Eastman Business Park in Rochester.

Kodak Director of Web Development and Strategy, Matt Stoffel, says it’s not just people who remember Ektachrome from years ago and who are nostalgic who are interested in this film.

“There’s a lot folks who did not actually grow up with film and are exploring this as something totally new, and they’re finding qualities in the image that film is able to produce that you really can’t get out of digital."

Stoffel says Ektachrome has a particular quality to it that a lot of film enthusiasts like.

"The colors are beautiful, they’re deep and rich, they’re kind of hyper-real, it’s not fake-looking, but there’s an extra kind of punch to it."

A 16 millimeter format will be available later this year.