It’s a rainy late fall day in New York City and the Metropolitan Museum of Art is crowded. Even Walter Liedtke, one of the museum’s curators, has to vie for viewing space. As he tells the story of a once debated Rembrandt painting, he has to shuffle to the side to make room for some patrons.

"I can’t really see it on the surface, but in X-rays there’s been a lot of discussion as to whether this picture was longer on the bottom," he described, before being interrupted.

Studying the weaves of the canvas is done by shooting x-rays through the layers of paint and exposing what’s behind the image most only glance at on the wall.

For Liedtke, the X-ray of the canvas helped determine this painting was not cropped nearly as much once suspected. "If anything is lost from the bottom of the sheet of canvas, it’s like two inches," he said. "The fabric weave tells us that."

For a long time, studying the weave pattern of a painting had to be done manually. That was until signal processing engineer Rick Johnson created an algorithm.

Johnson is an engineering professor at Cornell University. With a wispy, long white beard and big glasses, he’s also an art geek. 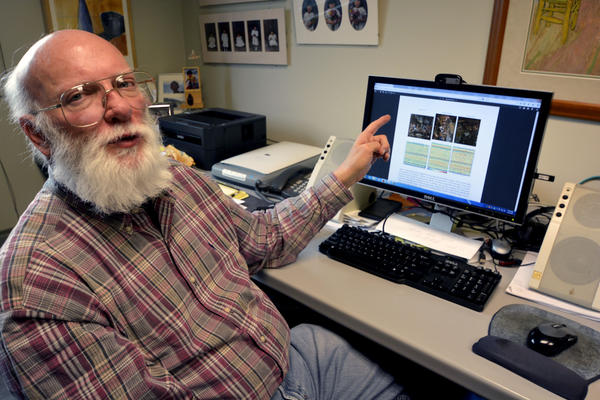 His first exposure to art museums was on a college fellowship to the Netherlands. He later learned about the standard practice of counting threads by hand with a magnifying glass.

"Can you think of anything more tedious?" he jokes.

When Johnson looked those threads counts, he saw patterns. He also realized he could digitize those patterns and designed a computer algorithm for counting every single thread in a painting. 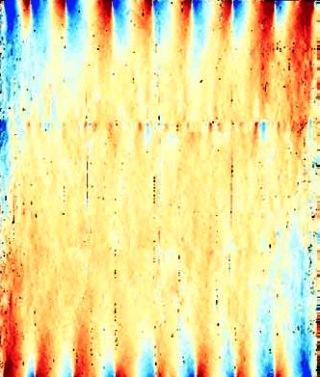 What Johnson came up with was something that looked like a heat map. It shows the thread’s pattern weaving through the canvas. Threads woven together tightly show red.

Another arrow in the quiver

It’s worth pointing out here, that taking X-ray images of art is nothing new. And counting the threads on canvas isn’t new either. What Johnson has done is, is hugely amplify the amount of data gleaned from those images.

"We’re like detectives, and you don’t know that it’s the lipstick smudge on the glass on the mantelpiece that you need rather than the fingerprint that’s under the mantelpiece," said Johnson. "And so basically, where we’re coming in is, with one of those pieces of information to add to all the others."

Returning to New York’s art museums, Johnson’s technique has helped Walter Liedtke at the Met correctly identify that two Vermeer paintings were meant to go together, as a pair -- by showing they’re from the same bolt of canvas. They’ve been re-hung next to each other in the National Gallery in London. 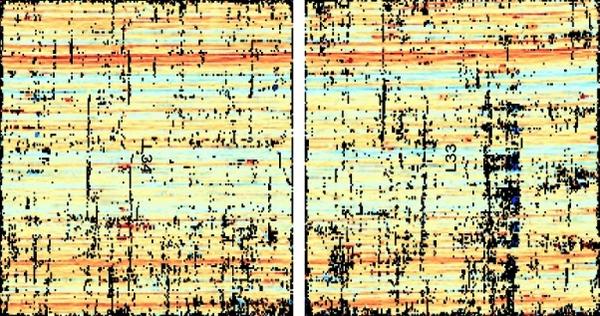 Digital thread counting was also applied to the authentication of a long disputed Van Gogh painting last year. But those are just the more celebrated examples in what will be simpler applications.

"It’s obvious to a museum person that this puts one more arrow in the quiver of technical ammunition to apply to your pictures," Liedtke said.

After all, Liedtke is the one that has to know which clue in the patterns to look for. And then pair it with extensive knowledge of the artist.

"The technology is promising"

Counting threads on a canvas is only one of the ways Johnson’s work can be applied.

The Morgan Library and Museum has an extensive collection of Rembrandt prints. Head conservator Margaret Ellis is using Johnson’s algorithm to find patterns in the handmade papers Rembrandt used to do something the museum never would have been able to do before. 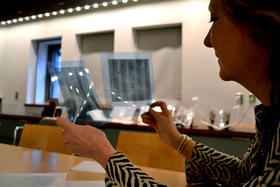 "Because you could say, ‘Well there’s a bunch of beta-radiographs, why don’t you put them over a light box and see if their chain line intervals match?’" Ellis said.

So having the computer find the patterns will help Ellis list the prints in the right chronological order.

"We’ve come up with two, which doesn’t seem like a huge number. However, to me, it shows the technology is promising," she said.

Ellis emphasizes that this is just the beginning of using signal processing in prints. "It’s not authentication, it’s information," she said. "It’s just more information."

After canvas and handmade paper, Johnson hopes to use his technique on photographs and then maybe on textiles. It could be applied to any material that produces a hidden pattern.

Branch by branch, artist grafts a Tree of 40 Fruit

Imagine dozens of different kinds of fruit all hanging from a single tree. It's the dream of a Syracuse artist, who is building such a tree, branch by branch.

Grafting fruit trees is a practice almost as old as fruit trees themselves. Mending branches from two different varieties of fruit is how we get hybrid fruit varieties.

Syracuse University art professor Sam Van Aken is taking the art of graft to another level.