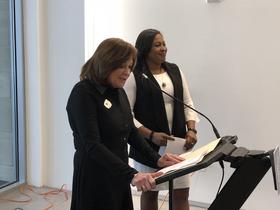 The development project at Parcel 5 in downtown Rochester is moving forward, and a familiar face is driving the effort.

Sandy Parker, the former president of what’s now called the Rochester Chamber of Commerce, will lead the team responsible for developing the empty lot into a mixed-use complex. She will work on a volunteer basis.

The complex will be anchored by the Golisano Arts & Entertainment Center, the projected new home of the Rochester Broadway Theatre League.

“I could not think of anyone better to help move this effort forward than Sandy Parker,” Rochester Mayor Lovely Warren said in a statement. “Sandy knows how to get things done and she also shares my vision for a thriving, alive and exciting downtown as an anchor to move our city forward and create jobs.”

Warren says she will ask City Council to push the project further along by bringing in a consultant from the firm Westlake Reed Leskosky, who will answer questions regarding the project’s long-term impacts. She’s also asking for the Council’s support for the project.

RBTL says they’re addressing some of the questions that have already come up. A preliminary design by RBTL will include a green roof with outdoor performance space, and a movie theater. Parker says that by adding these additional entertainment options, it will ensure the site will get a lot of use.

Parker’s duties will include fundraising oversight. Warren says that philanthropist Tom Golisano has reaffirmed his $25 million pledge toward the project, and the project team says it has secured $90 million of the $135 million cost for the project, including private funding from the developer. State funds are also a part of this project.

RBTL officials say they are making progress on its fundraising goals for the new venue and are also exploring future uses for RBTL’s current home, Auditorium Theatre.