The Central New York Regional Economic Development Council began to gather public input Thursday night on what should be included in its submission to Gov. Andrew Cuomo's Upstate Revitalization Initiative. The program is a competition for $1.5 billion in economic aid that will be distributed to three out of seven regions in upstate New York.

Rob Simpson, president of Centerstate CEO is also is a co-chairman of the council, said some themes are already developing from the public’s input.

“I heard a lot of great comments today, loud and clear. Issues about workforce development and skills and human capital as being underpinning to our success. There's clearly a sustainability theme as it relates to opportunities for green industry. We've heard about the need for innovation and retaining young people,” said Simpson.

About 75 people participated at the forum at Le Moyne College to share. A poll of the audience found that a majority in the audience said attracting and retaining young adults was the most important issue facing the central New York region. 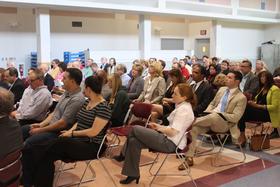 Two additional public forums will be held in May before central New York submits its entry. Simpson says it’s important to get the community behind the region’s entry.

“This is our moment. The level of community engagement and buy-in to our vision is a central and critical criteria in their evaluation of our strategy. If we don't have that consensus here, we don't have the right to ask for five hundred million dollars of investment,” said Simpson.

The winners of the initiative will be announced in the fall.  The governor’s office has said the winning regions will be selected based on their proposals to create permanent private sector jobs and investments. 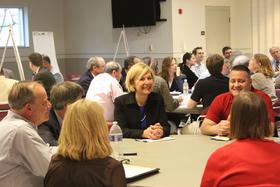 The other regions competing are Mid-Hudson, the Capital Region, Mohawk Valley, North Country, Southern Tier and Finger Lakes. All regions will continue to receive economic development money from the state, regardless of whether they win the competition.