Supporters of farmworker justice chanted “yes we can” at a rally in Syracuse Thursday. They’re encouraging support for the Farmworkers Fair Labor practices Act, a piece of legislation that’s been stalled in the state legislature for 15 years.

Rebecca Fuentes, of the Workers’ Center of Central New York, says it’s the state Senate that usually holds up farmworkers’ rights legislation, but she’s hopeful that its new leadership will makes a difference. Senate Majority leader John Flanagan, who has been in the position for just over a year has expressed support of the issue in the past. 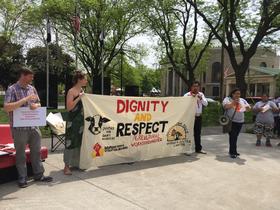 The legislation touches on a number of fair labor practices, including establishing an eight-hour day, providing farmworkers overtime pay and giving them the right to organize and bargain collectively.

The Workers' Center also recently filed a lawsuit that challenges the exclusion of farmworkers to organize at a farm in Lowville.