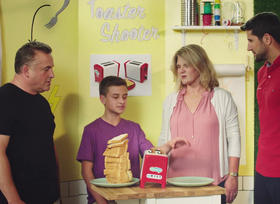 After seeing his grandmother burn herself on a toaster, Andrew Young had an idea. It led to an invention - the "Toaster Shooter." It's now a $250,000 winner.

14-year-old Andrew Young from Batavia was announced as the winner of the Frito-Lay "Dreamvention" contest for his toaster that shoots toast into the air and onto your plate. Young beat out four other teen inventors from across the country.

The toaster is tilted to the side and has bigger springs, so when your toast is done it shoots into the air and falls onto your plate.

In October, Young told WXXI News that if he won the grand prize, he would save that money for college. He wants to go to MIT to become an astronaut.

The Frito-Lay "Dreamvention" contest asked kids to create something to solve everyday problems. The company is holding the contest again.