To celebrate the United Nation's Women's Entrepreneurship Day, which was marked worldwide over the weekend, Lieutenant Governor Kathy Hochul paid a visit to two small women-owned businesses working out of the University at Buffalo. One is working to create new weapons against cancer, while the other is working to ensure drugs that enter the market do not bring dangerous unintended consequences.

Hochul, along with State Senator Tim Kennedy, visited two small women-led companies working within the Sherman Annex on UB's South Campus. Their first visit was to CytoCybernetics, where CEO Glenna Bett explained how her company has developed a system that uses computers and live human cells to screen drugs in their early stages of development, to determine whether they may cause any potentially deadly side effects. 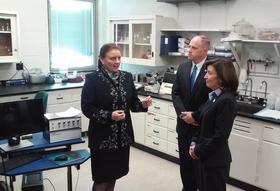 "Astoundingly, 70 percent of candidate drugs don't make it to market because they have a side effect of heart attacks or arrythmia," Dr. Bett said. "This is an important part of the drug development process, identifying the bad drugs, eliminating them and only bringing the good drugs to market."

One floor below Dr. Bett's office, Dr. Kate Rittenhouse Olson is leading a company known as For Robin, named in memory of her sister, who died several years ago from breast cancer. For Robin is developing an antibody that is showing promise as an effective weapon against cancer cells.

"We feel it'll be able to help kill cancer cells in 80 percent of breast cancer patients," said Dr. Olson, who added that their antibody has the potential to help kill lung, colon, prostate and other cancer cells, too.

Both companies were aided by the START-UP NY program, which offers 10 years of tax freedom in exchange for working with an academic center and creating new jobs. Lt. Governor Hochul came to these offices to help celebrate START-UP NY along with the UN's Women's Entrepreneurship Day.

"We know that we now have 202 businesses that have qualified for this and we're expecting over 4,400 jobs immediately, with huge investments," Hochul said.

Both companies working inside the Sherman Annex have added several jobs since starting. Now, they're looking ahead to manufacturing opportunities and potential partners within Western New York.

"The adjacent neighborhood is an area that needs help," said Hochul about the UB South Campus. "There are a lot of people there. It's an underserved community. We want to make sure they have the same opportunities as everyone else in Western New York."

Dr. Bett pointed to computer tablet maker Bak USA, which operates in the former Sheehan Memorial Hospital, as an ideal example of how to grow within the community.

"They are great players in the ecosystem," she said. "JP (Bak) is always so excited to share what he's doing with the community, and I think it's a great model. We similarly have some manufacturing we need to be done. If we can replicate what Bak USA has been doing, I would be very happy for us, for the community and for the entrepreneurial ecosystem."