UR and Harris Corporation bring 'Big Data' center to Rochester 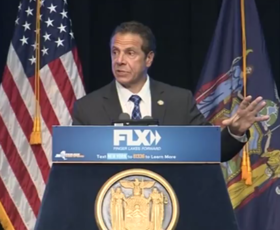 The University of Rochester is partnering with Harris Corp. to create the Rochester Data Science Consortium that will be housed on the UR campus.

The joint effort will help companies and governments analyze large amounts of data — an industry known as “big data” — in order to spot trends that can help the companies, consumers and citizens.

“Data science analysis is a rapidly growing field, with all sectors using more data to make better decisions,” said Danny Wegman, the president and chairman of the Wegmans Family Charitable Foundation, which committed $20 million to the consortium. He is also the chair of UR’s Board of Trustees. “Higher education is a critical partner in helping industry to understand and analyze the mountains of data that will be processed to discern the right decisions from the wrong ones, and the University of Rochester is in position to lead the way.”

Gov. Andrew Cuomo came to Rochester for the announcement and highlighted the importance of a higher education partner to enter new industries such as big data.

“The economy now follows the educational institutes,” Cuomo explained to the crowd gathered at the Wegmans Conference Center in Chili on Thursday. “What made Silicon Valley, Silicon Valley? Stanford and the schools. That’s where it’s going. MIT generated a whole economy. If you have the education system as the engine, the businesses will follow.”

Through a release, the state says UR has identified data science as the centerpiece of its strategic plans, and that data science jobs are among the most in-demand jobs nationally, with positions in the industry to grow over the next seven years.